Get fresh music recommendations delivered to your inbox every Friday.

by My Dear Killer 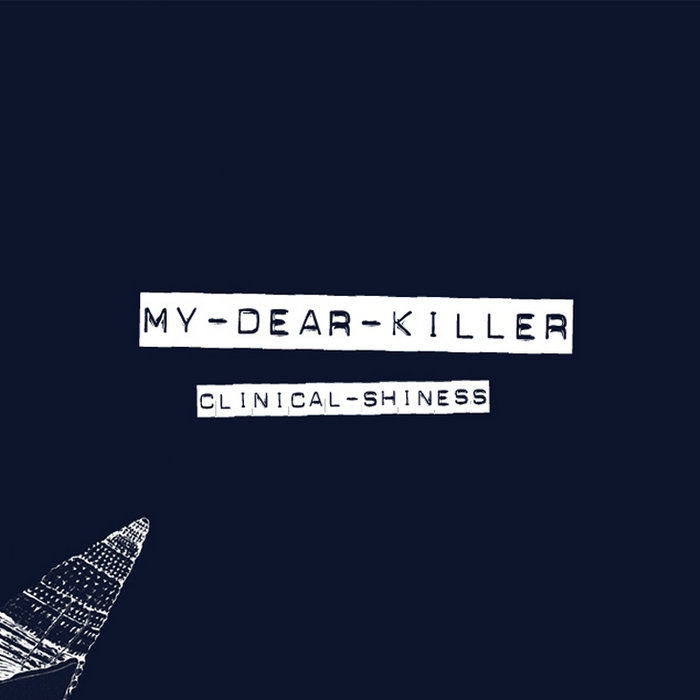 0. Abstract
When everything has become clear, it could have been a May afternoon but actually it was August. Summer you’re cruel. It could have been during a thunderstorm, while sitting on a quivering axes of his favourite bench and observing the migrating geese, flying in lines over the disappearing edge of the horizon that he started to wonder where the clinical shyness has gone. Where? When he’s been the wish talker he has always been. The expert of plans and design sketched over the transparency of rice-paper sheets. Indulging in his own way of sending coded messages, drawn on paper boats that he knew would have sunk anyway. It would have been so much easier to make a phone call, if he ever had a telephone. And anyway, what took you so long to pick up the receiver? Meanwhile, crawling around the four corners of the room, he realised and said to himself I fear time. But time should have never been feared, as it cannot be recalled. There were enough chances to find the right words to apologise, surely, if he had ever wished to.

4. Discussion
The telephone didn’t ring at all that May afternoon. The light was getting into the room with an oblique direction when he picked up the receiver. He thought he could have predicted who was going to answer his call and almost any single word that was going to be said. And so it was. A regent- honeyeater flew from the other side of the scaffolding, to wake him up on a summer morning. It knocked at his windows. It screamed sentences he could not understand. He looked once again at his own projection. It was there; on the floor; cast on package paper. It was close to being completed. It was almost complete. But something was misplaced; didn’t fit; this was the only one thing worth all the effort. It was not yet understood. For all the times he had tried, he could not solve it. Not yet. He always ended up with the last bit in his hands, which could not be accommodated; not even forced in. The waves might smooth it, something else should. He thought he had to start a new game. Again. The primroses were dressed in melted gold from were he gave the last look at the estuary. He searched for something in an indefinite space or surface, through the border of fog and mist. When he stepped on the train, the only thing he knew was that he couldn’t have let things go on their own again.

1. Introduction
My Dear Killer has been for sometime a theoretical band, based on a light architecture of dreams, wonders, assumptions and hypothesis. We argued that lunatics are right! And we wrote tunes for mysterious AM stations of the undiscovered hemisphere, drank cups of tea and piled-up a number of cardboard boxes. There was enough space under our beds. Here we present the first job as a collective, in which Stefano S. plays the guitar, the tapes, the noise generators and does the voice. Lorenzo T. plays the guitars, the bass and noises. Marco G. plays the lap-steel guitar, the tapes and the noise generators. Mauro M. and Luca S. play the keyboards. Lindsey B. wrote the story.


2. Experimental Procedure
Original recordings: A May Afternoon, Clinical Shyness, Wish talker, What Took You So Long, Words and To Apologise were recorded using home built apparatus, consisting of random wave generators, biased amplifiers, detectors and recorders. The sound sources were a Jolana (mod. Proxima II), a Fender (mod. Music Master, home-modified to fit a second single coiled pick-up) or a Gibson (mod. Les Paul standard) guitars amplified through thermoionic tube amplifiers (Gibson mod. Mercury, Sovtek mod. Mig100). Distortion was obtained biasing the pick-up output through a combination of home-built units, based on previous releases from MXR (mod. Distortion +,Diode Silicon, type 1n4148, Germanium type 2N1948, LEDs 1n4566), Electro-Harmonix (Mods. Muff Fuzz, Big Muff) and Dallas Arbiter (mod. Fuzz Face, Ge-Transistors NPN AC-128). Sounds were collected from the ambient by dynamic microphones (Shure Mods. C606N and BG 2.0 and Paso Mod. M701) placed at about 5 cm and 1.2 m respectively from the signal source and sent to a conventional mixing device (LEM mod. S16DE), connected to a seven minus on track reel to reel recorder (TEAC Co. Tascam 80-8). The tape was a ½ inch Ampex 499, grandmaster multi-track mastering tape. (Lorenzo T. and Stefano S.)
Additional recordings, [Easter Session @ Magnetic Punch-in Floor]: Phone Calls and (I Fear) Time were recorded with a similar set-up as described above, with a few modifications. The sound sources were a Fender guitar (mod. Jaguar) and an Eko bass (mod. Unknown). The output from the guitar pick-ups was amplified through a Gibson (mod. Mercury II) amplifier while the bass guitar was amplified by a Sovtek (mod. Mig 100) amplifier. The detection equipment was the same as described above, with the exception that a ½ inch Ampex 456 mastering tape has been used, (Lorenzo T. and Stefano S.) [Summer Session @ Under My Bed studio] additional recordings on (I Fear) Time and To Apologise. The sound sources were an Ibanez (mod. AR300) or a Racine (mod. Telecaster-like) guitars. The sound sources were filters through the appropriate combination of the distortion modules described above and additional unit from DOD (mods. FX56b Super American Metal), modulation and envelope filter from DOD (FX65 stereo-Chorus; FX75B Stereo Flanger) and amplified by a Peavey (mod. studio-pro 110) solid-state amplifier. The travelling waves were captured from the ambient with dynamic microphones (Sennheiser MD441, Electro Voice 644 Shotgun) placed at about 2 cm and 30 cm respectively from the signal source and sent to a conventional mixing device (Beheringer mod. S16DE), which was on some occasions directly fed from the (stereo) output of the distortion-modulation line, and finally connected to reel to reel recorder described above. A ½ inch Ampex 456 mastering tape has been used as magnetic recording support. (Marco G. and Stefano S.) [Summer Session #2] Additional recordings on Clinical Shyness. The sound sources were a Roland (mod. Alfa-Juno 1) and a Chicco (mod. unknown) keyboards. The sounds were either directed to a mixing console (Yamaha mod. XL 12/6) or taken by a couple of narrow cardioid condenser microphones (ADK mod. SC-1 and AKG Behringer B2) from the inbuilt speakers of the keyboard and then directed to a analogue-digital converter (Echo, mod. Layla) plugged in a personal computer. (Mauro M. and Stefano S.) [Christmas Session @ 67 The Burroughs] Additional recording to A May Afternoon, Clinical Shyness, Wish talker, (I Fear) Time. The sound sources were a Jolana (as previously described) and a Gibson (mod. SG) guitars, amplified through a Fender (mod. Vibrosonic reverb) amplifier. Biasing of the signal sources were obtained by the appropriate combination of distortion units from Electro-harmonix (mod. Big Muff), DOD (mod. FX53 Classic Tube) and Boss (mod. DS-1 Distortion) and the envelope filters which were described above. The signals were captured by a combination of dynamic (Shure mods 58; C-24-162-1) and condenser (ADK, mods. SC-1 and A 51) microphones. The output of the microphones was directly sent to a 4 track tape recorder (TEAC Tascam 424mkII); a metal (type IV) tape cassette (SKF mod. ZX90) has been used as a magnetic recording support. (Niki E. and Stefano S.)
Sampling: Sampling on A May Afternoon and Clinical Shyness is from ‘The Night of the Hunter’; sampling on To Apologise is from ‘2001: A Space Odyssey’
Analogue Mixing:
The signals, recorded on different supports, were finally elaborated by sending either the premixed or the individual tracks (whether digital and cassette tape or reel to reel recorder has been used as a source) to the mixing console previously described. The final mixed signals were then fed into a home-built three-stage solid-state linear amplifier (bandwidth 50 KHz) and finally directed to a reel to reel 2 track recorder (Ampex mod. 601). The tape was a 1/4 inch Ampex (Quantageny) 456.
Digitalisation & Mastering:
Pre-digitalisation was done by an Echo (Layla) analogue-digital converter (by Mauro M.). The digitalisation of the finally mixed tracks was obtained by an Edirol (UA-3FX) analogue-digital converter, operating with a bandwidth of 48 KHz and resolution of 24 bit. The signal from the Ampex (mod 601) recorder was sent to the previously described solid-state amplifier, and then to a home built five-bands (100Hz, 500Hz, 1 KHz, 5 KHz, 10 KHz) parametric equaliser and a compressor-limited unit, operating with a fix output gain of -1dB and a threshold of -50dB. The output signals were directly sent to the analogue-digital converter, employed in the final digitalisation.

Under My Bed Recordings Vergiate, Italy

Under My Bed Recordings, is a No-Profit label based in Milan (Italy), founded in 2001, dedicated to home-recording productions. For us, do-it-yourself is a choice and an attitude, not a budget limitation. Hence, we preferentially produce minimalist folk, pop and, more rarely, electronic acts. We prefer to listen to Fe-magnetic supports, but anything else would be simply fine. We love tapes indeed ... more

Bandcamp Daily  your guide to the world of Bandcamp

Bonobo stops by to talk about his new record Fragments